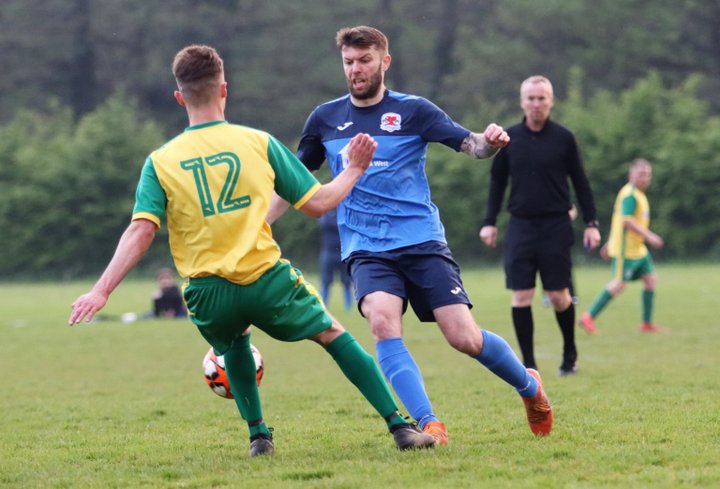 Glamorgan needed extra time to see off Cardiff Hibernian and secure a place in their first ever Milsom Harris Cup Final with a 6-4 victory on Tuesday (May 3).

It was a well contested game against two local teams, it was the Premier Division side who raced into a two-goal lead through Osian Morgan’s double.

The first came after 20 minutes after being set up by Rhys Briggs before he was found by Andrew White 11 minutes later to double Glamorgan’s lead.

However, the Stage Two group D runners-up, who will play in the Premier Division next season, fought back when Liam Beattie halved the scores a couple of minutes later with a scrappy goal when the captain was found by Luke Kazemi.
Morgan restored Glamorgan’s two goal cushion with his hat-trick three minutes from half-time after being set up by captain Ben Hewings.

But former Glamorgan player Matthew Andrew ensured there would be everything to play for in the second-half when he grabbed one back in stoppage time with a well taken free-kick.
Matthew Furnish levelled for Cardiff Hibs with a sublime goal four minutes after the break.
However, Morgan restored Glamorgan’s lead five minutes later with his fourth of the evening from Josh Lima’s pass in a topsy-turvy encounter.

Brian Coles’ superb finish made it four-all in the 66th minute and send the tie to extra time.

But a dubious decision which saw James Cotterill’s goal ruled out for handball, whilst Glamorgan had two penalty decisions go against them could have seen the game settled in normal time.
A fine save from goalkeeper Matthew Cooper in the first 10 minutes kept Cardiff Hibs in it but on 104 minutes Glamorgan took the lead when substitute Frank Major headed home Biggs’ well-worked corner.

And after a penalty was awarded three minutes later Major beautifully put it away to secure a place in the final against Tiger Bay.